We were in Helsinki on March 13, 2018, to eat Japanese food and also to visit a Japanese grocery Store. We bought many interesting and unknown snacks for us. We gathered on March 17, 2018, to taste and review the snacks. We tried every snack and told our personal opinions about them. Here is a picture of the snacks.

The first product we tested was Yokan.  Yokan is made of crushed Azuki beans and sugar. It’s sweet jelly, which is enjoyed with a green tea as a snack. Originally Yokan was made from Gelatin. First Yokan was made in 1191. The current form where Gelatin is replaced by Azuki beans was developed in Japan 1658.

In our opinions, Yokan was sweet, floury, beany and odorless. Janne thought it was best from our snacks.  Oskari said: The expectations for the product were not high because it was made of beans, but I surprised positively. 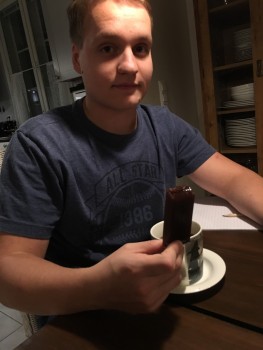 Next, we tested some salty Japanese snacks. Unfortunately, we did not understand all the names of the products but with the translator, we understood a little about them.

The first (red one) was a shichimi-flavored snack. It tasted a little like Teriyaki spice, soybeans and bread. Eero thought it was the best for our snacks.

Our last snack was the green one. It tasted like an alga with a familiar bread flavor.

We also needed something to drink. We bought Sangra: Melon soda. None of us had before tasted a beverage like this. It had a melon candy flavor. It was very sweet. We will definitely buy this more in Japan!

Lastly, we ate some Pockys. We tasted three different Pockys. They are biscuit sticks where is topping, which is usually chocolate. They are really common in Japan. They are usually enjoyed with water or milk. First Pocky was sold in 1966.

First, we ate original Pockys. It was a good combination of sweet and salty with a familiar flavor of KitKat. Reiska said about Pockys like this: a great mix of salt and sweet, which brought the perfect taste of biscuit stick.

Next was the white chocolate Pocky.  There was a taste of chocolate biscuits. The flavor of Filipinos was strong in these.

Lastly, we tasted Slim Pockys. They tasted very much like the originals but there was more chocolate flavor. Lauri thinks they were the best tasting Pockys. 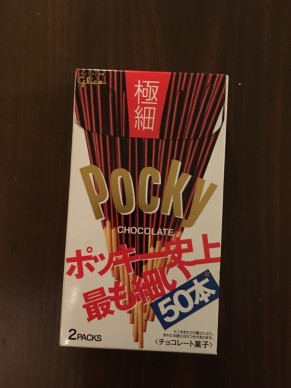